A logistics company will make its way to the N.C. Ports, according to the governor’s office. Port City Logistics will bring a $4.8 million payroll impact to the area. (Courtesy photo) WILMINGTON — In the spring, Wilmington City Council and New Hanover County Board of Commissioners voted to move forward […]

WILMINGTON — In the spring, Wilmington City Council and New Hanover County Board of Commissioners voted to move forward with business incentives for four companies that would attract more jobs and have a combined economic impact of over $125 million in the area. One of the four approved was dubbed “Project Speed.”

The governor’s office announced Tuesday all signals are go for Port City Logistics to move into New Hanover County.

The Savannah, Georgia, company will invest $16 million to construct a high velocity transload facility in Wilmington, according to a release from the governor’s office. It will bring 75 jobs to New Hanover County, with an average salary over $64,000 — 16% more than the area’s average annual wage of $53,421.

It projects a payroll impact of $4.8 million in the region.

The logistics company will not receive any incentive money upfront, but instead must meet the benchmarks set forth by the N.C. Department of Commerce’s One North Carolina Fund. The program “provides financial assistance to local governments to help attract economic investment and to create jobs,” according to the release.

Compelling Port City Logistics to move to the area has been in the works for multiple years, according to previous reporting from PCD. The company was considering Savannah, Charleston and Mobile as well, according tot he Wilmington Business Development. WBD collaborated with N.C. Ports to ensure the company docked in Wilmington.

Ports executive director Brian Clark said in a release it has made “significant investments” to enhance its capabilities so that the company will run smoothly.

“We are always looking for ways to pursue excellence and create innovative supply chain solutions and by spending time with the teams at NC Ports and Wilmington Business Development,” PCL CEO Eric Howell said in the release. “We saw great alignment and knew Wilmington was where we needed to be.

Port City Logistics will operate a 150,000-square-foot cross-dock facility, to be the first of its kind in Wilmington. It also plans to open a brokerage transportation office in the downtown area.

“[The] logistics provider is looking to mitigate risk by diversifying its clients’ gateways of entry during the international supply chain pinch, which we all are too acutely aware of,” WBD CEO Scott Satterfield told PCD earlier in the year.

WBD also noted third-party logistics (3PL) services are on the rise worldwide. It referenced a study published by the market intelligence firm BlueWeave Consulting in 2021 that estimated 3PL services culled $957.3 billion in 2020, with projections reaching $1.6 trillion by 2027.

Founded 21 years ago, Port City Logistics has grown its operations from five courier trucks to a full-service logistics operation. It works out of 3.5 million square feet of warehouse space, 14 distribution centers and 90 trucks.

“We are thrilled to expand into the North Carolina market so that our customers can enjoy the benefits of the Port of Wilmington with the fastest turn times in the U.S.,” Howell said in the release.

According to the N.C. Commerce Secretary Machelle Baker Sanders, the state is conveniently accessible for truckers, within a day’s drive of “nearly half” of the nation’s population.

“Among many supply chain advantages, our efficient deep water ports along the eastern seaboard and experienced workforce ensure that logistics companies can thrive while implementing its growth strategies,” she noted in the release.

“When companies are ready to connect with global markets, they are drawn to our state because of our workforce, excellent transportation network, and attractive quality of life,” Gov. Roy Cooper said in the release.

Projects Buckeye, Clear and Transit were also approved for incentives by the county and city. The “Transit” company, MegaCorps Logistics, a freight brokerage firm, was announced in March. It will bring 300 jobs, adding an $18.9-million economic impact in payroll.

“Clear” has been described as a well-known energy company serving southeastern North Carolina for decades, while “Buckeye” has been touted a known financial tech company in Wilmington.

Want to read more from PCD? Subscribe now and then sign up for our morning newsletter, Wilmington Wire, and get the headlines delivered to your inbox every morning.

Mon Aug 8 , 2022
Cincinnati-area hospitals are facing the most job vacancies they’ve had in 15 years, a new survey shows, with more than 5,800 healthcare positions open at the end of 2021. The Health Collaborative, the region’s joint organization of hospital systems, released the results of its annual Employee Workforce Survey on Monday, […] 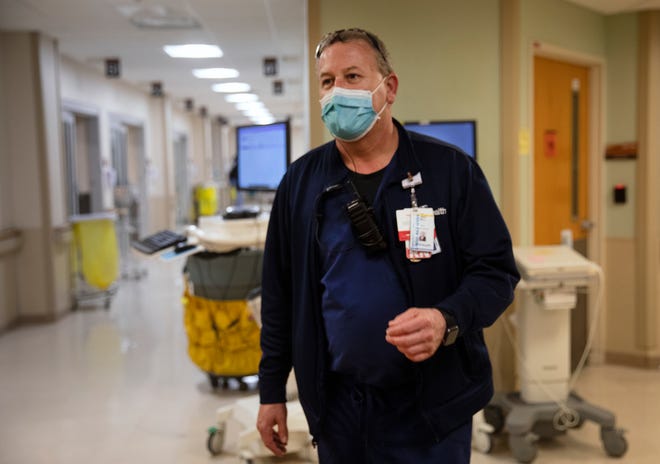