A recession is commonly — but unofficially — defined as two consecutive quarters of decline in real GDP. But this unofficial marker is how ARK Invest CEO Cathie Wood judges the health of the economy.

“We believe we are in a recession — two consecutive quarters of GDP declines is the beginning of that definition,” Wood said in an interview with Bloomberg Television on Monday. “Three consecutive months of declines in leading indicators, which we have now, would suggest the same.”

Although the National Bureau of Economic Research (NBER) serves as the official scorekeeper, Wood minced no words when asked about the U.S. economy.

U.S. economic activity contracted for the second-consecutive quarter in Q2 after unexpectedly falling 1.6% during the first quarter, the first negative reading since the second quarter of 2020, fueling the recession debate among strategists.

Some, however, have pointed to continued strength in the labor market as a buffer against recessionary fears, particularly after the Labor Department’s jobs report showed job gains twice as high as economists had expected on Friday.

“I know a lot of people are focusing on Friday’s big employment gain in nonfarm payrolls, but if you look at household employment, which is a much broader-based survey of employment, that has been flat to down over the last four months,” Wood said.

Wood’s comments to Bloomberg on Monday echo statements made during an interview with CNBC, in which Wood indicated the economy is in an inventory-led recession and job growth is set to slow.

July’s employment data showed a knockout 528,000 jobs were added to the U.S. economy last month. Headline payroll growth is calculated with the BLS’ establishment survey. The household survey, which is used to calculate the unemployment rate, showed a more moderate increase of 179,000 in July.

Wood also pointed to a rise in weekly jobless claims — which have hovered near an eight-month high in recent weeks — and company layoff announcements as signs the economy is out of step with recent job figures.

“We’re getting all kinds of signals that the economy is very weak,” Wood said. “While most economists are saying the inverted yield curve points to a recession, maybe next year, we believe we’ll be coming out of it next year.”

A yield curve inversion, in which short-dated bonds yield more than longer-dated ones, has historically been viewed as an indicator of an imminent economic recession.

Wood also said she expects the Federal Reserve will begin “ushering in” interest rate cuts next year — a comment that comes as Wall Street prepares for the U.S. central bank to continue raising rates aggressively to combat inflation.

ARK Invest’s beleaguered family of exchange-traded funds have been particularly susceptible to this year’s sell-off of technology stocks, which many have tied to rising interest rates.

The firm’s flagship ARK Innovation fund (ARKK) has lost more than half its value from the peak reached in February 2021 as the “disruptive” but often unprofitable picks that form Wood’s investment strategy plunged in the first six months of the year.

ARKK has rebounded along with other beaten-down names in recent weeks, gaining roughly 17% over the past month. Still, the fund remains down about 47% year-to-date as of Monday’s close.

Sat Aug 13 , 2022
That’s because Rep. Liz Cheney’s campaign has purchased a series of national ad spots on Fox News to run the viral campaign advertisement she debuted last week featuring her father. The ad shows Dick Cheney lacing into Trump as a “coward” who lies to his supporters and “tried to steal […] 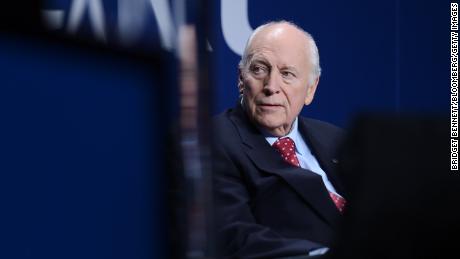