Russia’s invasion of Ukraine this year has roiled global energy markets and caused food shortages in some parts of the world. The disruptions could intensify during the winter, with soaring energy costs causing a recession in Europe and weakening the economies of the United States and many other nations. A […]

Russia’s invasion of Ukraine this year has roiled global energy markets and caused food shortages in some parts of the world. The disruptions could intensify during the winter, with soaring energy costs causing a recession in Europe and weakening the economies of the United States and many other nations. A broader and more devastating conflict remains possible.

A war involving China would be orders of magnitude worse. House Speaker Nancy Pelosi’s recent visit to Taiwan enraged China’s communist government, which has launched missiles over the island and conducted threatening military exercises meant to remind the world that China plans to annex Taiwan someday, whether peaceably or by force.

If that involved armed conflict, it would probably cause more damage to the world economy and global markets than any military confrontation since World War II. Unlike Russia or Ukraine, China’s powerhouse manufacturing sector is deeply linked with economies everywhere, including the United States and Europe. The seas around China and Taiwan are some of the busiest shipping lanes in the world.

Wartime disruption of all that commerce would be devastating. Before Russia’s invasion of Ukraine, for instance, U.S. trade with Russia was $36 billion per year. Trade with Ukraine was $4 billion per year, for a total of $40 billion in direct trade jeopardized by the war.

In the event of a war, “the economic fallout would be disastrous,” Hal Brands and Michael Beckley argue in the new book “Danger Zone: The Coming Conflict with China.” They add, “A global depression would be all but guaranteed.”

Taiwan broke away from China in 1949, at the end of China’s civil war, and now functions as an independent democracy. China, however, considers Taiwan a renegade republic, and President Xi Jinping insists that “reunification” with Taiwan is inevitable. Since Taiwan isn’t interested, China would have to coerce reunification.

A major blow to U.S. prosperity

The United States has a deliberately vague policy toward Taiwan, meant to imply that the U.S. military would help defend Taiwan if China attacked, without saying so overtly. President Biden clarified that policy in May, when he said that yes, the United States would defend Taiwan if China invaded. While that would be Taiwan’s best chance of surviving as an independent democracy, it may also be the worst scenario for the economic catastrophe a war over Taiwan would produce.

The Rand research organization estimates that a war involving China and the United States would slice 5% off the $23 trillion U.S. economy, That would be the biggest blow to American prosperity since the Great Depression in the 1930s. In 2009, amid the Great Recession, U.S. gross domestic product dropped by just 2.6%. The S&P 500 stock index bottomed out in 2009 55% below its prior peak, which might be a mere taste of the losses investors could expect from a U.S.-China war.

China’s $17 trillion economy would suffer a lot more, with its GDP plunging by as much as 25%, according to Rand. As with Russia’s economy after the invasion of Ukraine, the damage would likely come from several directions: economic sanctions imposed by the United States and other allied nations, attacks on Chinese infrastructure by Taiwan, the cost of sustaining a costly and perhaps lengthy war, and the decoupling of China from many international systems.

Taiwan’s relatively small $670 billion economy would probably suffer the most, as the nation fought for its very survival. Ukraine, in a similar existential fight right now, may endure a devastating 45% decline in output this year as it struggles to oust invading Russian forces. In Taiwan, the semiconductor industry is so important that capturing it intact might be a Day One goal of China’s military, if it were to invade. It’s also possible Taiwan and its allies could destroy state-of-the-art fabrication plants, to keep this vital technology out of Chinese hands.

“You could make a rational argument that the West would be a whole lot better off having the Taiwanese chip industry be a smoking hole in the ground than being under Chinese control,” Stanford University scholar Herbert Lin recently told Yahoo Finance’s Ben Werschkul.

These scenarios assume the United States does intervene on Taiwan’s behalf if China mounts a military attack, unleashing a terrifying war between two nuclear-armed nations. There could be other outcomes. For one thing, China may never attack Taiwan militarily, instead choosing “gray zone” tactics such as cyberwarfare and ongoing military exercises that make it riskier and costlier for other nations to do business with Taiwan. If China took this approach, it might carefully avoid some kind of threshold action that could trigger American involvement.

If there is a shooting war, Americans should not assume they’ll end up on the winning side. First, it’s not 100% clear the U.S. president, whoever he or she is, would be willing to risk thousands of American lives in Asia by committing ships and planes to a war against China on Taiwan’s behalf. There are ways to “defend Taiwan” without sending American service members to war, such as providing the kind of hardware and intelligence the United States is now supplying to Ukraine.

If the United States did go to war, victory would hardly be pre-ordained. China has been aggressively building its military for two decades and deliberately crafting a force able to defeat the United States in a war over Taiwan. China would be fighting off its own shores, while American supply lines would stretch over the vast Pacific Ocean.

Taiwan’s own military is the first line of defense, and it’s not clear the island’s forces are as prepared for war as China’s may be. One concern is a possible army of Chinese spies embedded in Taiwan’s national-security apparatus. The vaunted U.S. military could also find itself unprepared. As Brands and Beckley point out, U.S. military power is “about to dip,” as the Pentagon retires legions of industrial-era warships and bombers. Newer and better combat systems are coming, but not for a while.

“Mr. Xi has repeatedly said that the task of ‘liberating’ Taiwan cannot be passed down from generation to generation,” Brands and Beckley wrote recently in the Wall Street Journal. “In the mid- and late 2020s, he’ll have his best chance to accomplish that mission.”

Markets have shown no concern over Pelosi’s visit to Taiwan or China’s menacing response. The S&P 500 rose the week Pelosi visited Taiwan and China sent missiles flying, as investors interpreted the chest-puffing as posturing. There’s no tangible sign that China is preparing to launch an actual war or that President Xi would be willing to plunge his nation into a maelstrom he himself might not survive.

That’s probably right. But many analysts thought Russian President Vladimir Putin would never risk the wrath of the West by invading Ukraine, and Putin proved them wrong. There’s nothing to worry about until the moment invading forces cross a border. Then there’s everything to worry about.

Click here for politics news related to business and money

Trump takes the 5th, refuses to answer questions in probe of his business dealings

Fri Aug 12 , 2022
Former President Donald Trump did not answer questions from the New York attorney general’s office about his business dealings during a deposition Wednesday, invoking his Fifth Amendment right against self-incrimination. The deposition came as part of an ongoing probe into the former president’s businesses launched by New York Attorney General […] 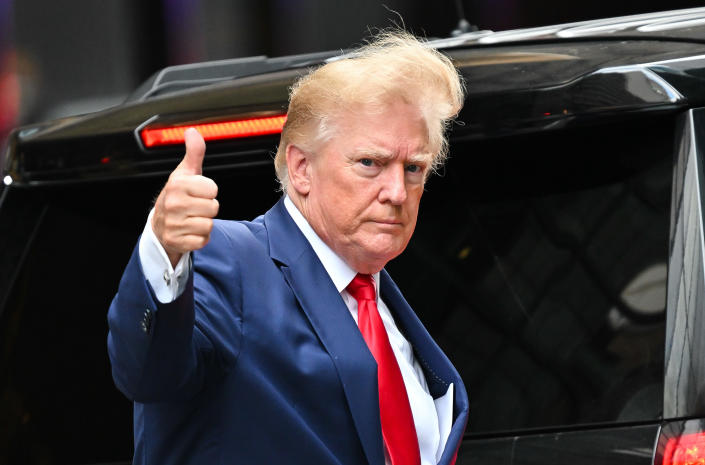