The grand prize awarded to Tickety Boo was $5,000 from Alloy Development, and $3,000 worth of public relations and social media support from Scooter Media.

The entrepreneurs recently completed Aviatra’s Launch class, a 10-week program which coaches new business owners on how to create a business plan with a three-year financial projection, work with an assigned mentor, and participate in networking and coaching events.

The allergen free treat manufacturer was founded by Abbi Rettig in October 2020 with one wholesale account. Today the company has grown large enough to operate their own manufacturing facility in Newport.

Rettig was inspired to create her company after she attended a kid’s birthday party. She witnessed kids being left out from eating the provided treats due to dietary restrictions.

Rettig herself suffers from Celiac Disease, and understands the dietary challenges people who suffer from food allergies and disorders face on a day-to-day basis.

Tickety Boo is a slang term used in the United Kingdom which means, “it’s all good.” Rettig and her husband previously lived in Northern England for approximately two years. While they lived in England, Rettig said the phrase was used everyday in casual conversation.

As Rettig and her husband became more accustomed to living in England, she learned to embraced the phrase.

Rettig’s long-term goal is to have Tickety Boo in pantries and freezers nationwide, and potentially worldwide.

The second place finish went to Helen On and Julie Rowland who work together on their The Nail Salon Network venture.

On is a native of Vietnam. According to On, approximately 80 percent of all nail salons in the United States are operated by Vietnamese Americans or people of Vietnamese descent.

On said there is a language barrier that can sometimes hinder the relationship between Vietnamese nail techs and their American clients.

“Most Vietnamese people, when they come to the United States, it’s tough to get a job because of the language barrier. They can’t do anything, so with the nail business, we are able to help each other,” On said.

She wanted to create an app that helps nail technicians and shop owners find quality solutions to fix this problem.

Her app is called Nailvigation, which operates user interfaces in both the English and Vietnamese languages. On said the app is currently being beta tested around the country.

“Clients can read their information, schedule an appointment and pick the service that they want, all while they are able to pick the color of nail polish they want at that point,” Rowland said.

It wasn’t an easy journey for On, who said at one point, the code for the app was lost entirely. On was able to regroup and build together a new team, pursuing her goals through to the finish line.

On has plans to add payroll and payment processing to the app in the future. There’s also a forum aspect to the app, which On hopes can help bring the nail community together.

Vale is founded by Molly Hoying and Dr. Jingjie Wu. Hoying has a background of engineering and has a MBA.

Vale is a company that produces carbon dioxide capturing electrolysers, a device that converts the energy of chemical reaction directly into two byproducts. Through the intake of carbon dioxide and water, ethylene and oxygen are produced.

Ethylene can be sold, and is used in the manufacturing of materials such as fabricated plastics and antifreeze.

Hoying joined forces with Wu and the University of Cincinnati, who also has an engineering background.

“If you didn’t know, every 10 seconds, 10,000 tons of carbon dioxide is released into the air,” Hoying said. “Vale Technologies is the solution to that problem.”

Hoying identifies large carbon dioxide emitters, such as oil and chemical companies, as the target audience for their product. Hoying said Vale has held informal interviews with over 125 companies that emit carbon dioxide.

Going forward, Hoying has developed a four part business plan which includes: conducting more market research, research and deployment on the prototype, enhancing the prototype, and to implementing a pilot project.

“It’s part of my mission to help and much as I can for kids growing up to have a nice future, and overall it’s something I’m very passionate about,” Hoying said.

Wed Sep 14 , 2022
Russia’s budget surplus for 2022 has almost evaporated after a sharp drop in energy exports during August led to a monthly deficit of as much as Rbs360bn ($5.9bn). Russia recorded a surplus of almost Rbs500bn in the first seven months of the year. But the cumulative total fell to only […] 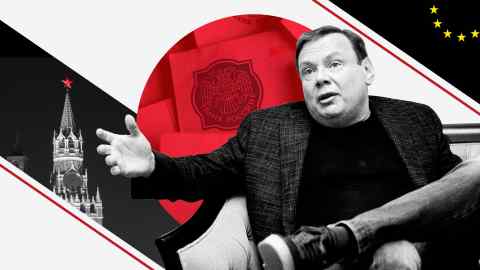