Robert Martz strides through the Time Manufacturing worksite, greeting employees with a wave or word. At 6-foot-8, the former University of Notre Dame defensive lineman stands above the crowd, much like Time’s products. The maker of aerial lifts and bucket trucks is ramping up production at 7601 Imperial Drive, hiring […]

Robert Martz strides through the Time Manufacturing worksite, greeting employees with a wave or word. At 6-foot-8, the former University of Notre Dame defensive lineman stands above the crowd, much like Time’s products.

The maker of aerial lifts and bucket trucks is ramping up production at 7601 Imperial Drive, hiring to launch a third shift and filling orders backlogged through next summer.

Employment stands at 600 locally, and Time Manufacturing could use another 50 people yesterday, human resources Vice President Bruce Hardt said. He said he remembers when a workforce of 350 represented a full roster in Waco. International demand from utility companies and foreign governments has grown.

Lifts and work platforms stretching hundreds of feet skyward are built, tested and shipped from multiple Time facilities straddling Imperial Drive. Martz, the vice president of manufacturing, gets an early start walking the concrete floors, checking progress, literally and figuratively gauging the work environment’s temperature. Martz is a 30-year manufacturing veteran, having turned to making things when a knee injury shortened his NFL career. Most family members live in the Midwest. But Martz’s work takes him everywhere, including Mexico and Texas.

Martz came to Time from Big Tex Trailers, a company with a global reach but headquartered in smallish Mount Pleasant in northeast Texas. Martz laughs and recalls his first week on the job there. Heavy snow interrupted what Martz believed would be a sunny welcome to the Lone Star State.

“I thought, ‘You folks lied to me,’” Martz said with a smile.

Martz’s arrival in 2017 coincided with longtime executive Jay Jeffrey’s ascension to president and chief commercial officer at Time Manufacturing. Jeffrey, as fans may remember, quarterbacked Baylor University in 1980, when the Bears won the Southwest Conference with a 10-win season. Jeffrey is a member of the Baylor University Athletic Hall of Fame.

As one might expect, Martz loves college football. With Jeffrey as a colleague, he finds tickets to Baylor games readily available. For what it’s worth, he said, he is impressed with the team under head coach Dave Aranda.

Martz’s assignment upon arrival at Time was whipping the manufacturing plant into shape. A Time information sheet says Martz has aced the exam, and then some, saying, “Manufacturing processes have since become state-of-the-art, while concurrently improving production volumes.”

The senior management team, including Martz, created a lean manufacturing system focused on what it calls “first time quality.” Versalift equipment should leave the plant with zero defects, meaning customers can use it immediately. The team tracks quality, cost, delivery, customer satisfaction and efficiency to grade the process and ensure every employee contributes to success.

New software allows Time/Versalift representatives to access customer records from one source, possibly reducing confusion and mixed signals. Another system gives managers real-time data and information about decisions made and goals set by the leadership team.

Back at the Waco plant on a muggy Thursday, Martz points out a laser beam cutting patterns in steel at the rate of 70 inches per minute. He notes the plant has 40 welding stations. He says lifts sold in China and Europe carry different color schemes and safety requirements. Time lifts produced locally can stretch 200 feet into the air. An affiliated company in Germany makes a 300-footer to work with wind turbines. Martz wonders aloud if logistics and demand would justify opening a similar plant in the United States.

Martz said pay at Time Manufacturing is competitive. He said he is aware many employers are offering $15-an-hour to start. He described that as a ballpark figure at Time, perhaps high for some job descriptions, low for others. He said turnover is greatest among assemblers.

Like other industries, Time Manufacturing has struggled with supply chain issues. But Hardt said conditions are improving. Among its biggest challenges is finding individuals to work the production line. Half considered have little or no experience. Time continues to view Texas State Technical College as a resource, not just in Waco but at campuses statewide.

Time produces equipment for electric utilities and telecom companies, bridge inspectors and tree trimmers. Specialty items include bucket trucks, digger derricks, cable placers and truck bodies. It has a board of directors, an office in Denmark to serve Europe, 2,600 employees and 300 service centers. Being a privately held company, it is not compelled to reveal financial information.

The company last year acquired Ruthmann, a producer of work platforms for the European market. It also bought CALCO Equipment, now called Versalift Canada and providing sales, service and financing in that country.

Get the latest local business news delivered FREE to your inbox weekly.

Tracking the robust recovery in the business sector since 2020

Sat Sep 3 , 2022
A Hamilton Project analysis of the business sector over the COVID-19 period finds that, despite initial fears of widespread failure, existing businesses and new entrepreneurship have defied earlier expectations, ending 2021 with nearly 450,000 more establishments in operation than prior to the pandemic. Underneath these aggregate results, patterns across industries […] 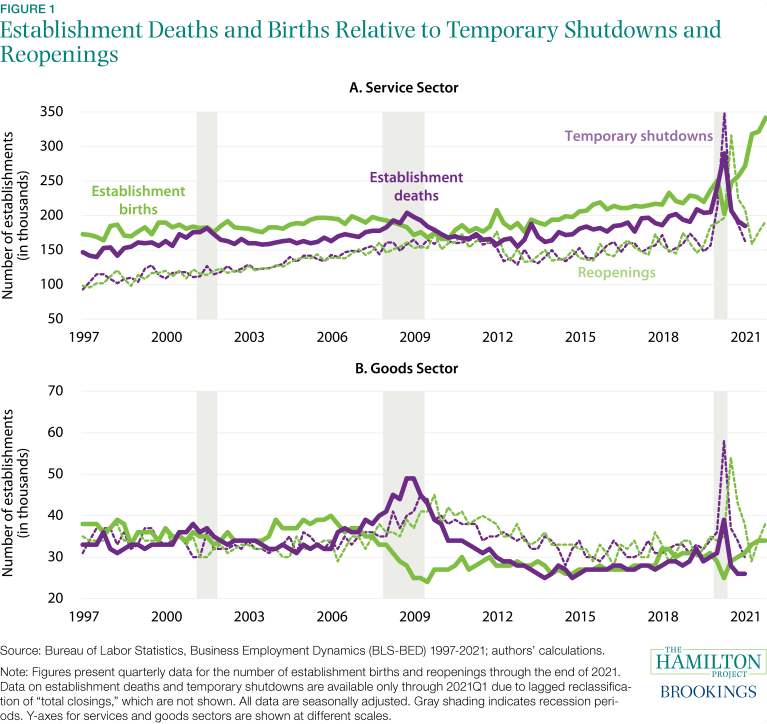