Detroit natives Orza Robertson II and Edward Brown Jr. started playing baseball together when they were 6 years old. Two weekends ago, the now college-age friends competed against each other for a $20,000 college scholarship.  Robertson attends Hampton University and Brown attends Alabama State. They reunited Sept. 15-18 as participants […]

Detroit natives Orza Robertson II and Edward Brown Jr. started playing baseball together when they were 6 years old. Two weekends ago, the now college-age friends competed against each other for a $20,000 college scholarship.  Robertson attends Hampton University and Brown attends Alabama State.

They reunited Sept. 15-18 as participants in a program called “Moguls in the Making,” where they pitched business plans for a chance to win the scholarship, and possibly get a lead on a job opportunity.

“What interested me the most was, I would say the name,” Brown said. “I see myself as a young mogul.”

The Detroiters were among other students who also attend historically Black colleges and universities who got a chance to win a scholarship and an entrepreneurship education.

The program, presented by Ally Financial, the Sean Anderson Foundation and the Thurgood Marshall College Fund, is in its fourth year. Ally Financial hosted the 60 students this year at its Charlotte, North Carolina, office.

There were 16 participants from Michigan, including Brown and Robertson, and the theme was economic mobility.

“Terrence usually interviews Sean, and Sean talks about his relationship with money and how he thought about his life after music and all the investments that he’s got,” Brimmer said. “I didn’t even know 90% of the things that he has invested in, which is everything from real estate to mobile home parks throughout Detroit, to, obviously, the Sean Anderson Foundation,” which Big Sean founded.

During the program, students were tasked to solve economic mobility problems in Charlotte and create a business plan with the solution.

Morehouse College’s team won this year. The Atlanta-based team pitched a plan that would bridge residents from being renters to becoming homeowners. Each of the four students on the team won $20,000 scholarships. They will also receive a guaranteed internship at Ally next summer, along with a swag bag that features an iPad. One of the winning students, Amari Torrance, is from Redford.

Second and third place winners also receive scholarships and every participating student gets an opportunity to interview for an internship at Ally.

So far, the company has hired 36 mogul participants as interns, along with 12 who were hired as full-time employees.

All students received T-shirts from the brand Detroit Vs. Everybody, which is owned by Tommey Walker. Each T-shirt says the HBCU’s name with the famous “Vs. Everybody” logo.

More:Month of Design is back with some intriguing pairings of art and business

Big Sean — who said he has many family members who went to HBCUs, so the colleges and universities have a special place in his heart — said he hopes the students will learn the importance of financial literacy.

“One of the main focuses is to really know how to work in a business, be a business, start a business, and everything that comes with the financial literacy aspect of it and the economic part of it — economic mobility,” he said. “And also just knowing how to be inclusive. Obviously, diversity is such an important part in business.”

“We also like to keep it expansive and let them come up with their creative business plans, and see which one is just most effective to where they come from,” he said of the participants. “They explain all aspects of why they’re doing what they’re doing.”

Big Sean continues to be present for these students and others outside of the program by providing inspiration and conversation because, he said, “sometimes, that’s all people got.” He reflected on a time where rapper Jay Z visited Cass Tech High School, where Big Sean went to school, and that experience changed his life moving forward. He hopes to be that inspiration for someone else.

Although they attend college in different states, things always seem to come full circle for them. Robertson said the friends went on to play baseball together in high school. Next, they both went to HBCUs, and by their sophomore year, they both became members of Alpha Phi Alpha Fraternity Inc. Now, they found themselves at the same Moguls program together.

Robertson said he hopes that the program will expand to more HBCUs and students in the future. During an interview Sept. 16, he said, “I feel like this is a great program. I feel like I wish everybody could experience it. I’ve only been here for two days and I can see the effort, the work that they put in.”

Sat Oct 1 , 2022
The University of Hawaiʻi is hosting a Virtual IT and Intelligence Career Fair on Friday, October 14, 10 a.m.–1 p.m., to help students explore career options with local employers in the IT and intelligence sectors. The event is targeted for graduating or recently graduated students who will have the opportunity […] 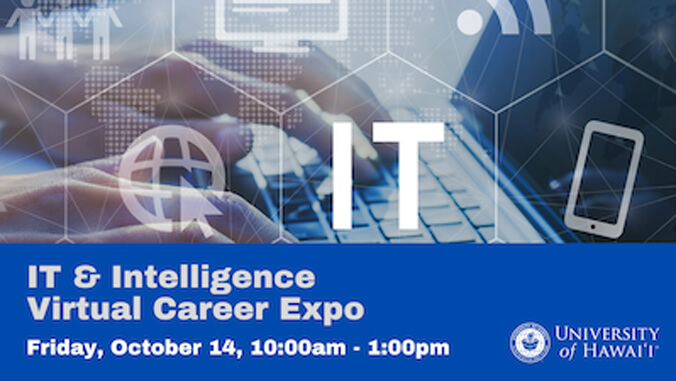